A Tale of Three Countries…

With the once-in-every-ten-year event, The Floriade horticultural exhibition, coming up in Venlo, now really is a great time to visit Holland.  But whilst there, why not sample some of the best of the countries that border the Netherlands too?  That’s exactly what I was lucky enough to do recently on a work trip to visit Holland, Belgium and Germany; a trip that really was a tale of three countries!
Our journey on the continent really began when we stopped in Ghent.  This beautiful Belgian city is often overlooked in favour of Bruges, but sitting just about an hour and a half away from Calais, it’s a great destination for a weekend break from the UK.  Similarly, its gorgeous canals and the St. Bavos Cathedral, famous for its altarpiece, The Adoration of the Mystic Lamb by Hubert van Eyck and his younger brother Jan van Eyck, make it a great place to stop on a longer journey, to stretch the legs and for a bite to eat.

Ghent
On from here, we couldn’t leave Belgium and cross into the Netherlands without sampling some Belgian chocolate.  And what better way to do this than by visiting a working Belgian chocolate factory?!  Chocolate Jacques, in Eupen, offers just that: as well as a really interesting museum and a very tempting and reasonably priced shop, visitors can also take a guided tour of the factory, which involves walking along a suspended walk way above the production line!  Very interesting –  after all, everyone loves a conveyor belt!
Travelling on further still to our hotel, and in complete contrast to the light hearted visit of the afternoon, quite by chance, we came across the American War Cemetery.  The sight of row upon row of unmarked graves is humbling at the best of times, but as we stopped here to pay our respects, the setting sun over the snow-covered fields lent a particularly tranquil, almost eerie, feel to the landscape as we realised that those that had fallen may have done so in the freezing cold conditions that we were experiencing, but certainly in much more horrendous circumstances, doing their duty for their country.  A sight to behold on this beautiful, if frosty, afternoon.

Sun setting over the snow-covered fields
Valkenburg was to be our base for the weekend, and the next morning, we had a chance to explore this charming little Dutch town.  Situated just 13kms east of Maastricht, it has the highest number of beds and hotel space in the Netherlands outside of Amsterdam.  And it’s easy to see why: winding cobbled lanes filled with colourful restaurants and souvenir shops, whose brightly hued clogs hang outside for all to see, are enough to enchant the visitor alone.   Add to that the pretty canal twisting through the centre of the town, the castle ruins perched high on a hilltop and accessed via cable car, looking out over the inhabitants below, and the marlstone caves, and you’ve got a recipe for a great little resort town.  From here, you’re also in an excellent position to undertake ‘the tour of three countries’; having sampled some of Belgian the day before, today was to be all about Germany. 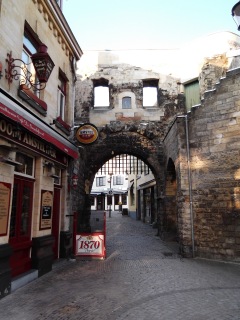 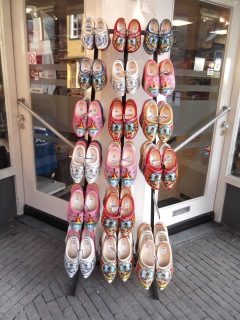 Clogs!
First stop for us on the German agenda was Aachen, although Cologne is also a viable destination from Valkenburg.  The beautiful Roman Spa city of Aachen is dominated by the imposing Cathedral, and as we visited on this bright and sunny morning, it reached high into the blue skies above us.  From here, we then visited the smaller town of Brühl.  Another gem of a town, the real treasure in its crown being Schloß Augustusburg.  This Rococo masterpiece was a favourite residence of the Electors of Cologne, and as you approach the castle, it’s easy to see why: manicured gardens border a magnificent golden palace, and it’s just as beautiful inside as it is out; the castle is used for state receptions, and as we walked in the footsteps of Queen Victoria and Queen Elizabeth II, as well as many other dignitaries, up the exquisite and very impressive Balthasar Neumann staircase, it was apparent why it’s not only used for state receptions but is also on the UNESCO World Heritage List.

A very cold me at Schloss Augustusburg!
On our last day we briefly took in some more of the Netherlands with a quick visit to Maastricht (if only these work trips allowed more time in places!) before taking in more still of Belgium.  We firstly visited the Caves of Remouchamps, which were first opened to the public in 1912. The tour here today consists not only of a walk through the pre-historic caves, but also a boat trip which glides mysteriously over the underground river.  The town of Remouchamps itself has almost an Alpine feel, and is a great place to stop for a coffee and Belgian waffle!
Our last visit of the trip was to be to the Gardens of Annevoie; although snow covered during our visit, it was easy to see their attraction.  The water gardens offered us a peaceful stop at the end of a busy trip – what better way to unwind before the long drive back to Calais?!

The Gardens of Annevoie
The Belgian Ardennes and their surrounding countryside are an often overlooked part of the continent, but there’s no reason why this should be the case.  With a base as appealing as Valkenburg to explore Holland from, and both Germany and Belgium nearby, a driving holiday here really is a great way to explore the hidden gems of Northern Europe!