Last Christmas it seemed that I threw myself into everything that the festive season had to offer. At least, that was my plan. From a tiny Christmas market on the riverfront at More London, to festive offerings at the garden centre, I was there. But of all of the festivities, the highlight of last year’s Christmas shenanigans has to have been the wonder of a Christmas production in a little known Norfolk village: the Thursford Christmas Spectacular!

A Sample of the East
As I’ve often told you, Mrs Lighty’s career in travel has its privileges. Being invited to the dress rehearsal of the Thursford Christmas Spectacular was certainly one of them! My colleagues and I decided that we would make the most of the privilege and sample what the East of England has to offer with an overnight stay at the Stoke by Nayland Hotel, Chelmsford.

Set on a verdant golf course, we arrived late on a wet and windy night after navigating the meandering country lanes that lead to the hotel, with one of the country’s worst storms having recently battered the region, and causing many a diversion due to fallen trees and flooded roads. The warm hotel was a welcome sight, and we piled into the bar for some hearty food and a glass of good wine.

The hotel is a haven of luxury set in the Essex countryside, and afforded us a good night’s sleep plus a filling breakfast, ready for us to continue our journey East the next day, and on to Ickworth House, one of the few National Trust properties open at this time of year. After crunching our way up the gravel drive on this cold November morning, we were rewarded with a quick look round, a cuppa and a slice of (gluten free) cake to set us up for the afternoon ahead.

An Unlikely Setting for Magic
We journeyed further. After a brief stop in the market town of Swaffham, we arrived at the main event: the Thursford Christmas Spectacular!

The village of Thursford is your typical East Anglian village – rolling fields, parish church, pretty cottages – but every Christmas it is put on the map when the biggest Christmas show in Europe comes to town, as well as being home to Santa’s Magical Journey for younger guests, a Santa’s Grotto on a bigger and better scale. 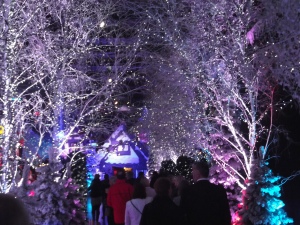 As we arrived, we were immediately drawn into the festive cheer, with a tree lined avenue adorned with fairly lights inviting us into a festive village, whose shops are groaning at the seams with traditional sweets and treats and decorations galore for theatre-goers to indulge in before the main event takes place. Squeals of delight went up from the female contingent of our party as we stepped out of the car after our long journey, and the excitement of Christmas exploded around us.

Outside one of the festive shops

The main event: Spectacular, Spectacular!
From here, we stepped into the huge auditorium, which hadn’t been spared the Christmas treatment, being adorned in colourful decorations from head to toe. If, at this point, you haven’t already been seduced by the festivities, what follows next won’t disappoint. The 3 hour performance delivers a feast for Christmas lovers; it’s an extravaganza of non-stop singing, dancing, variety, comedy and cabaret, managing to seamlessly blend from one to the other. All this, and it’s set in the magical surroundings of traditional mechanical organs and fairground carousels, too!

Decorations in the main Auditorium

We delighted in the performances, which flow easily from Las Vegas showgirl-type cabaret, to traditional choir-performed Christmas carols and to festive sing-a-longs in a matter of minutes. By the time we’d had our mulled wine and mince pie during the interval, and laughed and sung our way through the second half, Christmas was well and truly upon us.

I defy anyone to visit Thursford and not feel Christmassy; the Grinch and Scrooge would even have a hard time here! How can you watch hours of magical performance, beautifully sung carols, see shimmering decorations and not let the magic of Christmas touch your heart? The Thursford Christmas Spectacular manages to do all of this and more.