If you’re looking for a romantic weekend away, the Belgian city of Ghent isn’t an obvious choice of destination, admittedly.  Often overlooked in favour of its nearby cousin, Bruges, but much less touristy, Ghent is a great choice for a driving holiday from the UK as it’s just an hour and forty-five minutes drive from the Channel Tunnel – perfect for a European city break for two, which is just what my husband and I were lucky enough to enjoy here on our first anniversary weekend away!
Live like a local
Whereas Bruges is quite obviously a tourist destination, it’s much easier in Ghent (whilst still having its fair share of tourists) to get a feel for the real city.  It’s a great destination to explore on foot, for starters: a morning, or even a day, can be spent strolling around the cobbled lanes and over the bridges spanning pretty canals, and not forgetting mooching in the shops, both the little boutiques and high street chains alike.  The Sunday morning markets are also a great place to start living like a local; a highlight of our weekend for me was a visit to the Kouter Flower Market: on a Sunday morning, the Kouter area of the city is transformed with colourful blooms, accompanied by the tunes of a brass band from the old fashioned bandstand in the centre of the square.  If you’re celebrating a special occasion, as we were, or even just want to get your Sunday off to a stylish start, the best bit of the Kouter is the Blauwe Kiosk, where locals gather sociably for a plate of oysters and a glass of bubbly.  What better way to start your Sunday than with a glass of Champers?!
Gastro Ghent
You don’t have to have adventurous tastes, or a fluency in Flemish, to enjoy a good local meal in Ghent, but it would certainly be a help!  If you’re like us, and like to dine in the less touristy bistros and brasseries where you’re unlikely to hear any English spoken, then you’ll like the idea of taking your chances in Ghent.  We had two great meals, one, fortunately, from an English menu and one where we just had to take a chance on the waiter’s broken English description (By no means is this a criticism or complaint, his English was a lot better than my Flemish, that’s for certain!).  Over the two nights we were there we ended up with, between us, tasty honey-glazed ribs, a hearty mixed grill, a Flemish beef stew with apple sauce and Chicken Waterzooi – a chicken and vegetable dish in a creamy soup sauce – all delicious, all of which we might not have chosen had the menus been in English!
A city of history and discovery

Having said that Ghent is a city of locals, there is still plenty to attract the tourist.  From the STAM city museum, which tells the story of Ghent, through to the wonderful Van Eyck brother’s Adoration of the Mystic Lamb altar piece which is housed in the beautiful St. Bavos Cathedral, there’s lots to keep the weekender entertained.  There’s also the Gravensteen Castle which dates back to the middle ages to explore, and the Belfry to climb for brilliant panoramic views of the city….in fact, there’s so much to see and do, you might need more than just a weekend! 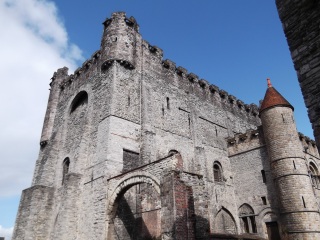 So if you’re thinking of visiting Bruges, why not consider Ghent as a trendy and attractive alternative?  There’s something in Ghent to suit everyone, from shopping and sightseeing to eating and exploring, and not forgetting those famous Belgian beers!  Oh and the other thing?  If you take your car, you can stop off in Bruges for lunch on the way back – best of both worlds!

One thought on “Gone to Ghent”