This time last year, I was lucky enough to have escaped to Bonn on a working weekend. As the former capital of West Germany, I had high expectations of the city. It’s a city that was given political power at one of the most volatile times in the country’s history, and it has had to live with the label of ‘Germany’s ex-capital’ since reunification. Quite a lot to put on a city!

But there’s more to Bonn than meets the eye: walking tours take in the former government quarter, sculptures are dotted around the city to make it an open air art gallery, and it’s renowned for the arts, particularly as it is the birthplace of one of Germany’s most famous sons, Beethoven. And it was to be Beethoven that was the focus of our bonny weekend in Bonn, as we were lucky enough to be there for the famous Beethoven festival.

One of the Cassius und Florentius sculptures in front of Bonn Minster, depicting the saints they are named after.

A Stadtbümmel and a Stein of Beer
As always with work familiarisation trips, there just isn’t enough time to see and do everything you’d like to. The Saturday morning was first full day in Bonn having arrived at 11pm the night before, and it saw us taking the tram to nearby Königswinter.

Situated approximately half an hour’s tram or boat ride away, Königswinter is a charming little suburb of Bonn. Much more traditionally German than the former capital, after our obligatory hotel inspection, we took the time to undertake a little ‘Stadtbümmel’ through the town to get a feel for the place. My colleague and I were struck by how quiet and peaceful the town was, especially for a Saturday.

As most people seemed to be enjoying a Stein of beer, or a glass of Prosecco, which appears to be the most popular of wine choices in Germany at the moment, we decided it was high time that we joined them in this relaxing approach to a Saturday morning. Having already spotted an idyllic looking restaurant perched high above the Rhine, with a terrace overlooking the river and overhanging with colourful geraniums, we enjoyed a glass or two whilst taking in the commanding views of the Rhine Valley. 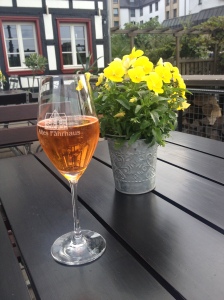 A little glass of Prosecco on a flower decked terrace – don’t mind if I do!

Had duty not called, I could have quite easily whiled away an hour or two sitting there in the late September sunshine; perhaps with a good book, perhaps just people watching!

Bonn in all its Beethoven Glory
After journeying back to Bonn, and stopping for a very, very quick look at Museum Mile en route – which I have to admit I was a little disappointed with, having expected it to be more like Museum Island in Berlin, but finding it to be a stretch of busy road with little character – it was time to meet the crowd who would become our travelling companions.

Our official day then began with a Beethoven themed guided tour, which would eventually take in his birth house and the Chamber Music Hall. Bonn’s old town is typically German, with an impressive cathedral and market square presided over by Beethoven. Our guide told us an amusing anecdote of how, when the seat of the government officially moved back to Berlin after German reunification, students draped Beethoven in a banner stating, “You can all go to Berlin….but I’m staying put!”. The allure of the city clearly had the students hooked! 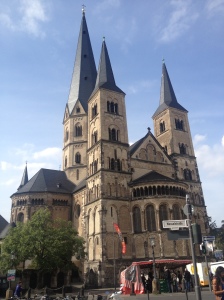 Are we all Classical Music Philistines?!
The Beethoven Festival was, of course, to be our main focus of the weekend. We walked to a restaurant in an envious spot, overlooking the river, and after a truly great dinner which included as a starter three differently flavoured soups served in three espresso cups – something I’d never seen before! – it was time for the concert.

We were to be treated to a performance by the Bamberg Symphony Orchestra, with the first half being an ‘orchestral painting, colour intensive’ piece by Witold Lutosławski, Symphony No. 3. I must admit, I am not an expert in classical music by any stretch of the imagination, but this piece really did go over my head! It was a brave choice, as it was very experimental. Unfortunately, it seemed to have passed the other audience members by too, as, very audibly, someone in the gallery made quite clear their feelings on the matter with a loud, shouted, German expletive just before the interval!

After a quick champagne refuelling, it was time for Beethoven’s Symphony no. 5 – something which was much easier to follow, and I could certainly appreciate! The Festival, which dates back to 1845 and has existed in its current form since 1998, attracted a record 75,000 visitors in 2013 and aims to give Beethoven a 21st century reboot. In this respect, it was great to see the experimental pieces such as Lutoslawski’s Symphony No.3 alongside the traditional, as even the least knowledgeable classical music fan can compare the two. 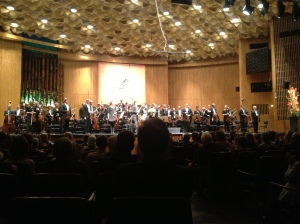 Relaxing on the Rhine: the perfect Sunday
Sunday dawned bright and early, and after a hearty breakfast, we set out for the Rhine. This time, we cruised to Königswinter rather than take the tram, on board the Moby Dick. It was just the relaxing start we needed, and was soon followed by an equally relaxing ride on the town’s road train and then a trip on a traditional cog railway, the Drachenfelsbahn, up to Schloss Drachenburg.

This was definitely my highlight of the weekend, with the castle rising high into the air, gold and splendid, and set amongst well manicured grounds which must look magnificent in the summer. Our guide was knowledgeable and amusing, entertaining us with stories of Mr Spinach and his fake organ recitals to entertain his guests in times gone by. The Rhine is a stunning region of Germany, and Schloss Drachenburg is just one of the many castles which dots its landscape, adding an air of regal charisma to the already beautiful landscape.

All in all, Bonn wasn’t at all what I expected it to be – I thought we would see and hear more of the history of its role within the FDR, but then we were there for a Beethoven themed tour, so this is definitely something that I would like to explore on a return trip. However, I wasn’t expecting the impressive old town, the charm of nearby Königswinter, and particularly the splendour of Schloss Drachenburg; so perhaps one shouldn’t judge Bonn by its cover; perhaps we should look beyond the obvious, and uncover the gems that await us on the Rhine.

The Rhine at Bonn